RMV workers union calls for agency to shutter all branches

Photo via The Boston Globe
Published in The Boston Globe
The union representing hundreds of Registry of Motor Vehicles employees is urging state officials to close the agency’s branches, the latest flashpoint in the debate over what work should be considered essential during a global pandemic.
The RMV has already closed all but eight of its 30 branch offices and has moved to an appointment-only system for some transactions, while shifting other business online. These moves came after concerning lines formed outside RMV branches in the earlier days of the crisis.
The registry has also extended renewal dates for most expired and expiring licenses and registrations by 60 days.
But the National Association of Government Employees, which represents the agency’s customer service representatives, said that still leaves workers dangerously exposed to the coronavirus, and urged Governor Charlie Baker to close all branches to the public.
“As the crisis escalates, the matter of closing down branches has reached life or death,” union president David Holway wrote in a letter to Baker this week. “Our members are being forced to deal directly with the public without protections in place to guard their health or safety.”
Baker’s transportation secretary, Stephanie Pollack, countered that some registry business remains crucial in a pandemic, such as licensing commercial drivers who are hauling protective equipment and other crisis-response materials into the state and making deliveries to people stuck at home. It’s also important to help residents obtain licenses and identifications if they need to access unemployment or Medicaid as a result of the economic fallout of the pandemic, she wrote.
“The work of the RMV helps keep supply chains, households, and the economy functional enough to support us through this crisis period and I’m proud of the way RMV employees have stepped up to fulfill this essential mission,” Pollack wrote in a response to Holway on Thursday.
But John Mann, another union leader, said the safest move for both RMV workers and the public would be to close the branches as the state braces for the projected peak of the pandemic.
“There is no legitimate reason to keep the Registry of Motor Vehicles open heading into a surge," he said. "Why not shut them down for 14 days and know that you probably will have an intact workforce when you’re ready to reopen?”
Mann said it is nearly impossible to ensure the safety of workers, citing several incidents at RMV branches. In one case, a customer fell ill while in the branch. In another, a customer indicated he or she had been exposed to somebody who tested positive for the virus, Mann said.
He also said that a customer coughed in the Plymouth branch this week, fueling further anxiety.
While in-person transactions are down considerably from the typical range of 10,000 to 14,000 a day, RMV branches are still handling as many as 1,800 daily customers. Several other states have
The registry has also extended renewal dates for most expired and expiring licenses and registrations by 60 days.
fully closed their registry branches.
The RMV was faulted last year for putting too little emphasis on safety after a commercial driver whose license should have been suspended crashed into a group of motorcyclists in New Hampshire, killing seven and exposing a system that failed to properly account for out-of-state violations.
As the coronavirus spread, Mann accused the RMV of moving too slowly to protect workers. He said union officials first raised the idea of outfitting workers with masks more than a month ago, but were rebuffed. RMV spokeswoman Judith Riley acknowledged the RMV only began recommending masks when the Centers for Disease Control and Prevention recommended them last week. The RMV is now distributing cloth masks to employees, Pollack wrote in her letter.
Union leaders also said that despite the order to move to appointment-only transactions, there has still been some walk-in service at RMV locations. Pollack also seemed to acknowledge this, writing in her letter: “While we have been allowing walk-ins during the transition to the appointments system, we are tightening up so that we get to a true appointments-only system.”
The RMV’s website currently blocks users from booking appointments for many transactions, such as license renewals, while allowing bookings for other transactions, like applying for a new ID or registration.
The state has also put a hold on applications for the so-called Real ID license, which require an inperson visit and added documentation to verify identity. The federal government was scheduled this fall to make these IDs the only acceptable driver’s license to board a domestic flight, but has pushed that deadline back a year due to the pandemic. 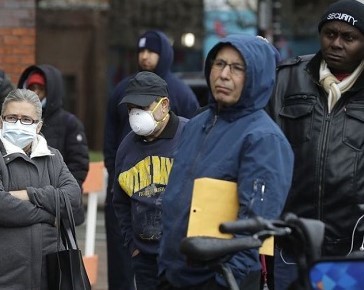