House Bill 80, the Workers’ Compensation Budget with a provision that seeks to extend PTSD benefits for Ohio first responders, was recently passed by the House of Representatives and will now move forward to a vote at the Senate.

The IAEP urges you and your fellow EMS professionals to contact your elected officials in the Senate TODAY and ask them to support the provision to the Bureau of Workers' Compensation budget allowing police, firefighters and emergency medical workers to file claims without a correlating physical injury.

Let your voice be heard. Find your representative contact information by clicking here and call now.

Read more about the legislative changes being made in the below article by Angela Childers published by BusinessInsurance.com.

The Ohio House of Representatives passed the state’s 2020-2021 workers compensation budget in a 55-38 vote Thursday in a battle over whether a provision in the bill would make it difficult for illegal workers to file claims for workers compensation.

H.B. 80, which will now move to the state’s Senate for consideration, stipulates that injured workers can only file for workers compensation if they truthfully acknowledge whether they are a citizen, authorized worker or an illegal or unauthorized worker. The legislation states that claimants who provide false information are ineligible to receive workers comp or benefits and will be subject to prosecution for violation of Ohio statutes.

Policy Matters Ohio, a nonprofit policy research institute based in Columbus, Ohio, said in a news release that the amendment “creates an incentive for unscrupulous operators to seek out undocumented workers, then cut corners on safety.”

A bill does offer workers comp protections for post-traumatic stress disorder suffered by first responders in the course of their employment, as well as psychiatric conditions arising from an occupational injury or disease caused by a forcible sexual encounter. 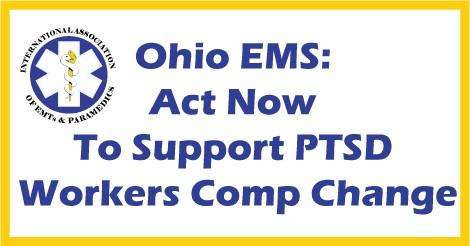