NAGE stands behind our brothers and sisters in the nursing field in support of safe staffing limits.
Published in the Commonwealth Magazine
Written by Barbara Madeloni & Jane McAlevey
October 29, 2018

IF YOU BELIEVE in climate change, then voting yes on Question 1, which addresses patient care, patient safety, and case overload for hospital nurses, should be obvious.

The issues are alike in two key ways. First, just as there’s a vast body of knowledge supporting strict limits on carbon production, there’s an overwhelming amount of research and data supporting strict limits on the number of patients one nurse should be caring for. Second, the same core strategy is deployed by the health care and fossil fuel industries to discount the problem and discredit the evidence supporting the solution: Confuse voters by “raising issues” then bombard the airwaves with lies.

We are both academics and practitioners. We have spent our lives in health care and education, two economic sectors where the decisions are mostly made by men and the hands-on work is mostly done by women—whose skill, experience, and intelligence are routinely ignored.
We have been leaders in policy making and negotiation in these fields, always using an interest-based approach. One of us led the joint health care union–health care industry campaign Put Families First that in 2003 successfully reversed the largest cuts to Medicaid and Medicare ever made, under George W. Bush’s administration. And one led the effort to save public education by defeating corporate charter school expansion in Massachusetts in 2016. We’d like to lay out the facts regarding Question 1, review the evidence, and offer some analysis about the nature of the public relations offensive being waged by the hospital industry against the front-line supporters of safe patient limits: bedside nurses.

The Facts
What nurses themselves think about Question 1 should be paramount. You’ve no doubt seen or heard the industry-funded advertisements in which a nurse says something like, “I am a nurse and I am voting no.” As we know from the charter school campaign, and the old tobacco industry campaigns, you can always find someone in the field to say what the corporate industry leaders need them to say. The nurses’ union, architect of the ballot question, represents 70 percent of all hospital bedside nurses in Massachusetts. Seventy percent. Keep that figure in your head while you weigh some facts against industry assertions and their coverage in the media.

We’ve read a lot about the $25,000 fine hospitals will be charged each time they fail to ensure the safe patient limits. The point has been raised everywhere, from The Boston Globe to this magazine—and it’s simply not true. Read the actual language of Question 1: Before a hospital reported in violation could be assessed such a fine, the Health Policy Commission would conduct a thorough investigation, then report to the attorney general, who would conduct a second investigation and afterward might decide to bring an action in Superior Court. This constant fear mongering about the $25,000 fine is as out of proportion as a late-night White House tweet. And there’s the same wide distance between facts and coverage for every single issue raised by the hospital industry against Question 1.

For example, it’s been widely reported that the law must be implemented immediately, in January, giving the hospitals no time to prepare. Not true, by a long shot. The language of the measure states clearly that all that must be in place in January is a plan for implementation. We know from our recent experience with the cannabis law that the implementation itself can take up to two years. Further, most hospitals are covered by collective bargaining agreements with the nurses’ union, and the proposed law states that if there is a collective bargaining agreement in place, the law will take effect when the contract is next negotiated. Many of these agreements don’t expire until 2020, 2021, or even 2022, giving hospitals a few years to get ready. There is cogent evidence on implementation, and how it works, that bears discussing.

The Massachusetts ICU law, which limits how many patients a nurse in the intensive care units can have at any one time, has been cited by some as a test case proving that safe patient limits have not been shown to result in improved patient outcomes. This criticism is disingenuous, based on early outcomes before the ICU law had been fully implemented. The law was signed by Gov. Deval Patrick on June 30, 2014. Hospitals then had to develop plans to implement the law.

For assessment purposes, 2016 is considered the first full year of the law’s implementation. By 2017, infection rates in ICUs (specifically, catheter-associated urinary tract infections, or CAUTI) showed statistically significant improvement. This is research-supported evidence: Infection rates are an extremely important marker of hospital care quality, and the ICU law is already helping reduce them.

On the broader issue of the effectiveness of safe limits, opponents of Question 1 have used odd bits and pieces of cherry-picked reports while ignoring the most extensive, longitudinal, evidence-based research. Linda Aiken and her research team at the University of Pennsylvania are the nursing-field equivalent of the Intergovernmental Panel on Climate Change (IPCC), leading authorities on safe limits, nurse burnout, and most other key issues affecting nurses and the link between patient care and nurse staffing. Aiken, herself a nurse before becoming the top researcher on issues related to nursing, has conducted exhaustive research on a multitude of nursing-related issues. Her research team’s data is unambiguous. Increased nurse staffing is good for patient-care outcomes. It saves lives. Period.

The Analysis
Cost. Remember, when we ask about cost, we are asking: How much will it cost to save patient lives and reduce nurse burnout. Question 1 opponents would prefer you forget that these will be the outcome if this ballot question passes. But analytically speaking, there’s simply no way not to recognize the extreme bias in the Health Policy Commission’s cost analysis. The HPC, a state agency, worked for three full months only with hospital executives and data from the Hospital Association of Massachusetts, which opposes Question 1. It seems to us that if a state agency is to conduct a fair and unbiased report on any measure, it needs to bring together both the proponents and the opponents of that measure. The HPC did not, and in failing to do so has badly served the consumers and voters of Massachusetts.

Why would a state agency that is meant to be objective work for months exclusively with hospital executives, and never consult the state’s largest bedside nurses’ organization? Very likely for the same reason that nurses have not been able to pass this needed and overdue law in the Legislature: The health care industry (and it is an industry) is arguably the single most powerful lobbying force in Massachusetts.

In any analysis of the power structure of this state, no one can credibly argue that nurses are seen as equal players with the hospital lobby on this health-care issue or any other. The HPC is normally considered credible, but in this instance, in their analysis, they’ve failed the voters, as well as patients and nurses.

The evidence on cost, on improved patient outcomes, on reduced nurse burnout and nurse turnover, can be found by looking at the test case of California, whose nurses have overwhelmingly endorsed Question 1, and provided extensive evidence based on their own experience to back that support. They’ve made video messages and formal endorsements, yet the HPC never spoke to any of them. Instead, the agency relied exclusively on reports such as one in which a grand total of 23 interviews were conducted—but only with hospital executives and managers; not a single interview was given by a bedside nurse or representative of a bedside nurses’ organization.

On Question 1, women who do the hands-on work in hospitals have amassed a formidable body of real-world experience, of longitudinal studies, of extensively researched data on the benefits of safe patent limits. The opinions of the organization representing 70 percent of all registered nurses in this state are strong, but the evidence that backs them is stronger still. The Massachusetts Nurses Association, like the Massachusetts Teachers Association, is one of the largest organizations of women in the state. They have spent years coming together in meetings all across Massachusetts to write this ballot question. They know what they are doing, day in and day out, in the hospitals, and they know what they are talking about in this crucial policy debate. Are we going to listen to them? 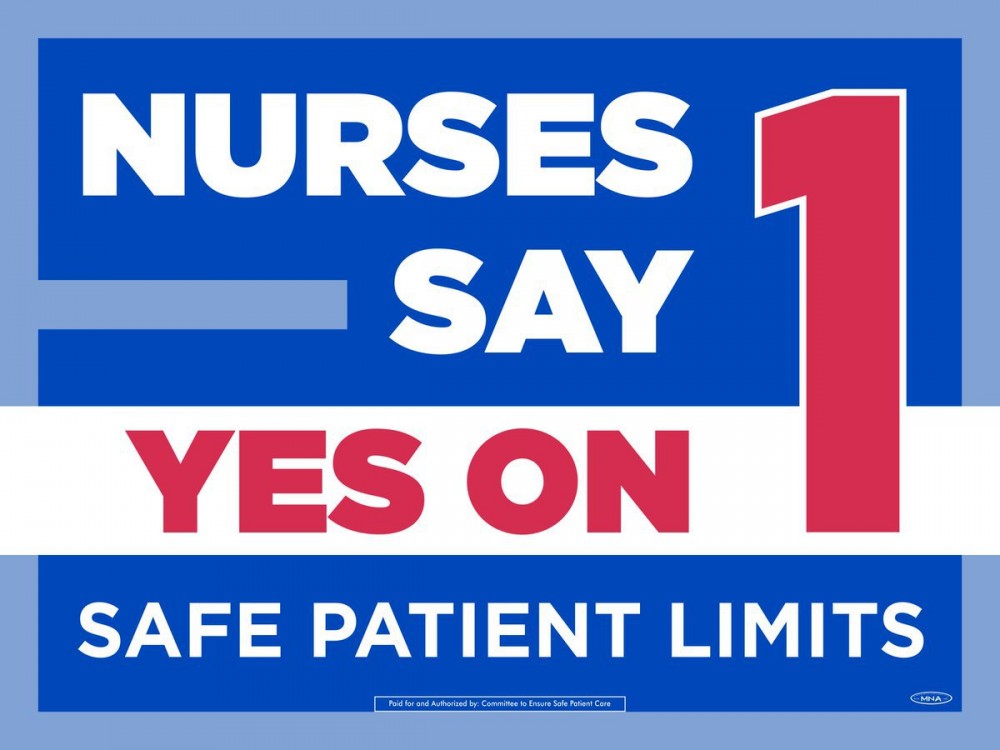