In the news business, we have something called “Man Bites Dog” stories, which are yarns in which something really bizarre happens.

Last week, I felt such a story coming on after talking with Lt. Steve Zygaj. We were discussing the rash of break-ins and car thefts in Buckhead, yet I found the usually dour Atlanta street cop to be unusually happy.

Now, he obviously wasn’t giddy about the crime wave, nor the number of repeat offenders who are continually captured and released. No, he was grumbling about that.

But Zygaj displayed an uncharacteristically sunny side when asked about Atlanta Police Department morale. He was happy that the city finally made good late last year in delivering long-promised pay raises, delayed salary increases that had created a level of outright hostility in the ranks for more than a decade.

Zygaj, who heads the APD’s chapter of the International Brotherhood of Police Officers, even spoke highly of Mayor Keisha Lance Bottoms.

“I have no complaints with this administration; I give her props,” he said. “She said she was going to pay us and she held to her word. I have the utmost respect for her.”

The pay increase, up to 30 percent for some officers, “has changed the quality of life,” said Zygaj. “People are just happier. When you see someone at a strip club throwing $1,000 into the air — that’s how I feel every day.”

Lt. Steve Zygaj, head of the Atlanta police union, shows his happy face after police get a long-anticipated raise.  (HANDOUT)

He said officers are now deciding whether they still need to hold second jobs or work those jobs as often.

“This has changed people’s lifestyles. They can see their wives and kids,” he said. “They even have hobbies.”

Rumor has it that Zygaj is taking up coin collecting.

I met Zygaj in 2014 when he put out a call in the department for officers to show up at an Atlanta City Council meeting to show they were Unhappy. At the time, APD had released a video version of the department’s brass dancing to the monster sing-along hit “Happy.”

But most cops in the department weren’t feeling that joy because of a bitter and protracted battle with the city over pay. In fact, then-Mayor Kasim Reed was refusing to consider a pay hike because police and firefighters had filed a lawsuit challenging Hizzoner’s move to cut their pensions.

The pension cuts (done for financial reasons) and the pay squeeze had turned Georgia’s largest department into a sieve, a vessel that leaked officers to retirement and resignations faster than it could hire and train them.

And that hemorrhaging continued, as officers jumped to suburban departments that offered more money and less crime.

A few years ago, Mayor Reed hit the 2,000-officer Holy Grail for like a minute, but that number has consistently fallen since. Currently, the force has about 1,680 officers, although it is authorized to have 2,032.

Last summer, the Atlanta Police Foundation released a study “that found Atlanta police are paid below the median rates of their law enforcement peers, with a lower floor, lower ceiling and a longer wait to advance from the bottom to the top,” according to an AJC story.

Mayor Bottoms said the “objective study” helped move the city to finally come up with the cash after all these years. She did not want to speak about why the previous administration did not move to raise the pay. She said she looked at the issue with “fresh eyes” and made it happen.

She said Chief Erika Shields and Deputy Chief Scott Kreher brought the proposal to her a few months ago.

(NOTE: Regarding the change in the APD Happy Meter, here is what then-Sgt. Scott Kreher, who headed the police union, said 10 years ago about departmental morale: “It’s the worst I’ve seen in 17 years.”)

The mayor told me that the first round of raises, which came in December, were for the lowest-ranking officers. “Those who needed it the most can feel it first,” she said.

The increase was such a sea change that the city of Brookhaven, which had poached Atlanta cops for years, last month jacked up pay in its department by 21 percent.

Brookhaven was worried it might lose cops to Atlanta. That is truly Man Bites Dog.

The raises might be turning things around. The department said there’s a doubling of applicants from last year.

And so far this year, 16 officers who left APD have asked to be rehired.

Compare that to all of 2018, when just 11 former APD cops wanted to return.

I called former union chief Ken Allen, a retired detective with three decades in the game.

Allen also spoke well of the current mayor. A pay boost will do that. “She speaks to officers and acknowledges them. Says, ‘Thank you,’ ” Allen said. “A little courtesy goes a long way.

“This is the largest pay raise ever given,” he said. “She can stand up and boast. No one can deny it.”

Allen said he recently had a conversation with a sergeant who said, “The other officers got their pay. Do you really think we’ll get ours?”

Allen said the money for the next rounds of raises hasn’t been determined and worries that enthusiasm to carry through might diminish if city finances take a hit.

“Until it reaches all the ranks, there will be questions,” he said.

The mayor said the pay increase rollout will be spread over four years, not three.

Told of officers’ skepticism, she said, “That’s understandable. I know where the skepticism comes from. All I can say is wait. And watch.” 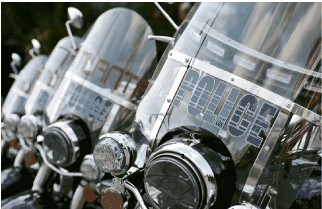