Nominations are now open for fifteen (15) seats on your Local Executive Board. One Court Officer from each of the following seven (7) regions will be elected: Cape & Islands, Bristol, Plymouth, Suffolk Superior, Essex/Middlesex, Middlesex Superior, and Western. The Central Region and the Suffolk/Norfolk Region will each elect two Court Officers to the Executive Board. Additionally, two Associate Court Officers, one from Eastern Massachusetts and one from Western Massachusetts, will be elected. Also, the two candidates who receive the greatest number of votes among all Assistant Chief Court Officers, will be elected to the Executive Board. These fifteen (15) officers thus elected will serve as the Local 458 Executive Board. The Executive Board will include eleven (11) Court Officers, two (2) Associate Court Officers, and two (2) Assistant Chief Court Officers. The term of office is three years. To be eligible to run for office: a) you must be a NAGE member in good standing for one continuous year prior to the date nominations open (June 3, 2019); b) you must be permanently assigned to the region and/or class you are seeking to represent. All local members may nominate candidates for office. All nominations must be seconded. Self-nominations are permissible but must be seconded too. Candidates must provide written acceptance of nomination on the forms provided by the Election Officer. All Nomination Forms must be submitted to Local Election Officer Thomas Flynn by Thursday, June 20, 2019 at 12 p.m. It is the responsibility of the person making the nomination to confirm the Election Officer received the nomination before the Nomination period closes.

Nomination Forms and Nomination Acceptance Forms may be returned to Election Officer Flynn by U.S. Mail at 159 Burgin Parkway, Quincy, MA 02169; by FAX at 617/472-7566; or by email at tflynn@nage.org.
ELECTION
Ballots will be mailed to Local 458 members on or about July 9, 2019, and will be counted Thursday, August 8, 2019, at 10 a.m. at NAGE Headquarters, 159 Burgin Parkway, Quincy, Massachusetts. Write-in candidates will not be accepted. To be eligible to vote, a member in good standing must be paying dues before the close of the Nomination period (June 20, 2019). A member shall only vote in the Region/Class (Block) to which they are permanently assigned. All candidates and members are welcome to attend the ballot tally. Election Officer Flynn can be reached at 617-376-7246 or by email at tflynn@nage.org if you have any questions. Also, if you know of any member who did not receive the notice of Nominations postcard, please have them call Election Officer Flynn to update their home address. In the event of a tie vote for any office, ballots to resolve the tie will be mailed immediately following the tally and counted on September 3, 2019.

This notice can be downloaded HERE. 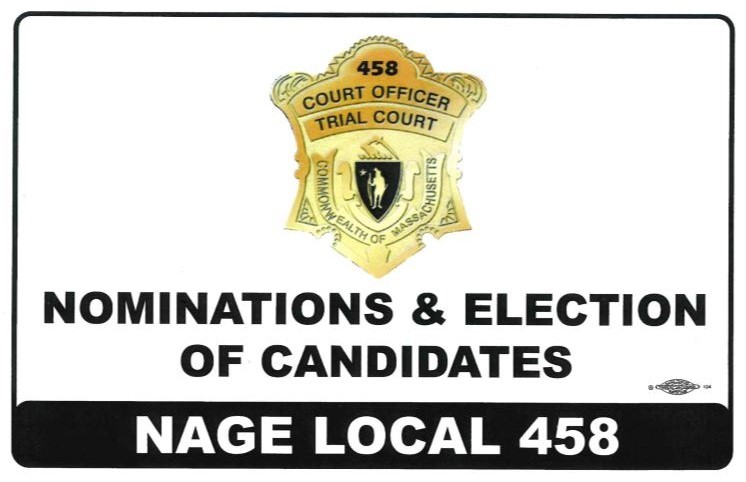