This Saturday, June 19th, Americans throughout the country will observe Juneteenth, a holiday commemorating the emancipation of enslaved African Americans. Although the Emancipation Proclamation was signed by President Abraham Lincoln in 1863, enslaved African Americans in Texas were not told that they were emancipated until two years later. On June 19, 1865 General Gordon Granger read General Order No. 3 to the people of Texas.  The order read:

The people of Texas are informed that in accordance with a Proclamation from the Executive of the United States, all slaves are free. This involves an absolute equality of rights and rights of property between former masters and slaves, and the connection heretofore existing between them become that between employer and hired laborer.

Juneteenth is a time of recognition of our African American brothers and sisters who have labored in the fight for racial and economic justice. It is also a celebration of freedom by and for all Americans regardless of race, nationality, religion, gender, sexual orientation or disability.

This year’s Juneteenth day of recognition comes at a particularly sensitive and critical time. As our nation confronts longstanding systemic racism, economic disparities, and the need for improved police and community relations, NAGE believes that it is important to take this opportunity to reflect and renew our commitment to racial, economic and social justice for all Americans. Thus, for the first time in NAGE’s history, we will observe Juneteenth as an official holiday and encourage President Biden to sign the Juneteenth bill into law to create a new federal holiday!

On behalf of the national leadership and in solidarity with workers of every race, nationality, religion, gender, sexual orientation, or disability, we wish you and your family a safe and prosperous Juneteenth! 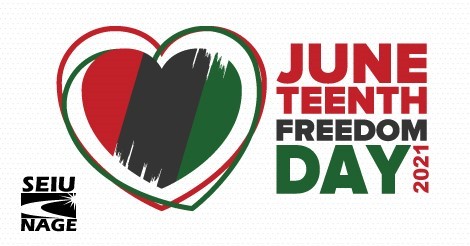