Congratulations and best of luck to IBPO Local 489 Officer Troy Pina and his sister Jayla as they head to the 2021 Olympics!
Story published in The Narragansett Times
Written by Allie Lewis

SOUTH KINGSTOWN – One of South Kingstown’s finest is heading to the Olympics.

Officer Troy Pina, 22, and his younger sister, Jayla, 16, of Seekonk, will be making history in Tokyo this summer, regardless of whether or not they bring home the gold. Together, the duo will be part of the first Cape Verdean  swim team to ever compete in the Olympics.

“It should be fun,” an enthusiastic Troy said on Wednesday afternoon, moments after being surprised by the entire South Kingstown Police Department with a grand send off.

The rookie cop has been with the force a little over a month now, and is still in the midst of the department’s 12-week field training program — a role he stepped into shortly after graduating from the Rhode Island Municipal Police Academy in May.

He’ll be taking a two week hiatus from his budding career in law enforcement, though, while he’s off competing in Tokyo.

“Everyone here is proud and extremely excited for him being able to compete in the Olympics,” said Chief Joel Ewing-Chow, who helped distract Troy while the entire department worked to give him a memorable send off.

On Wednesday afternoon, while the morning shift of officers were getting ready to head home, and the later shift was just beginning to arrive, a small banner reading “Good Luck Officer Pina – 2021 Olympics,” was strung up between two raised fire truck ladders. Quietly, nearly everyone in the department — officers and emergency medical services staff, and even a records office employee — lined the walkway Troy would have to travel to get to his truck.

As Troy and Chief Ewing-Chow exited the building, they were greeted by loud whoops and cheers, and a thunder of applause.

Troy holds a Bachelor’s of Criminal Justice from Saint Peter’s University in New Jersey, where he swam competitively throughout his entire undergraduate career. When he was a freshman, Troy competed with the Cabo Verde National Team, and also garnered attention from his home university, where he had been named student athlete of the month.

In February 2020, about a month before the global pandemic upended everyone’s plans and would keep Troy out of the pool for quite some time, the college junior gave an impressive performance in the Metro Atlantic Athletics Conference (MAAC) Championships. Troy set a new personal best, 22.56, in the 50 free — which is the same event he’ll be swimming in Tokyo on behalf of his mother’s home nation, Cape Verde.

In addition to setting a new personal best, Troy also swam the second-fastest time in the 200 fly, an impressive 2:03.81.

Before competing at the collegiate level, Troy also smashed records and made the All-Star team for four straight years in a row at Seekonk High School. At the 2017 Southcoast Conference, during his senior year of high school, Troy became the newest record holder in four separate events.

When he wasn’t in the pool, Troy was breaking records while running on his high school’s cross country and track teams.

His younger sister, Jayla, is currently swimming for Seekonk High School and will be swimming for Cape Verde in the 100 backstroke.

These past few months have been a challenge for Troy as he worked towards finishing his college degree, graduated from the police academy and became one of the newest members of the South Kingstown Police Department — all while training for the Olympics.

He’s put in countless hours of training, and even though he might not be swimming under the American flag, there’s a whole community of people in southern Rhode Island and southeastern Massachusetts who will be cheering him on. 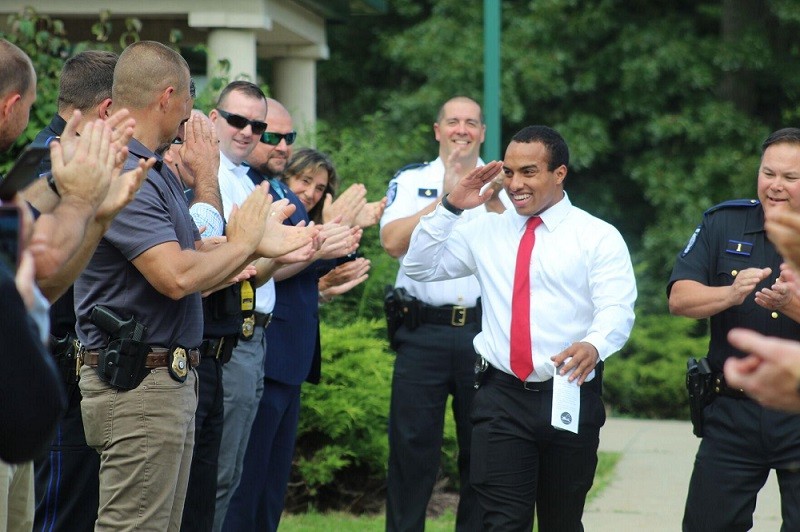