“Fifteen dollars — the minimum wage — is not enough money for the work that you guys do,” Phil Petit, national director of the International Assn. of EMTs and Paramedics, told dozens of Care Ambulance workers clad in red shirts outside Los Angeles City Hall.

Union officials said that many Care EMTs in L.A. and Orange counties are being paid roughly $15 or $16 an hour, which they said was below nearby competitors. Workers picketed Monday in downtown Los Angeles and outside the offices of the L.A. County and Orange County emergency medical services agencies, holding up signs that read “Fair Pay for First Responders” and “Is Your Life Worth More Than Minimum Wage?”

EMTs at the company tend to be young, and “some people leave before they can even drink,” said Ryan Walters, a Care EMT and president of IAEP Local 370. Walters said that to make ends meet, he had lived with his parents until he was almost 30. “The company wants to hire people and use them up as fast as possible.”

Union leaders said that more than a quarter of Care EMTs were quitting or retiring annually out of frustration with low wages and other problems at the company. A Care spokesperson declined to answer questions about its pay rates, but said its turnover was in line with the usual level for emergency medical services.

Care employees “do not historically leave for other ambulance services, and exit interviews have not revealed any of the claimed reasons ... as a significant cause of employee departures,” communications director Jeff Lucia said in an email responding to a union statement. Instead, Lucia said that the most common reasons that its EMTs leave are to join fire departments or law enforcement or to go to paramedic school.

San Diego, CA - February 25: Triage clinician Maureen Jacquot at work in the Telecare office of San Diego County's Mobile Crisis Response Team (MCRT). MCRT dispatches behavioral health teams that can respond to mental health and substance use emergencies instead of police. Friday, Feb. 25, 2022 in San Diego, CA. (Lisa Hornak / For The San Diego Union-Tribune)
The company supports the right of its employees to make their voices heard, Lucia added. “Our goal is to reach a collective bargaining agreement that is sustainable and fair for our dedicated employees,” he said.

Care Ambulance, which is part of the international company Falck Group, provides services to Los Angeles County, Orange County, and other jurisdictions as a contractor. In L.A. and Orange counties, its units serve areas that are home to roughly 6 million people, including the bulk of the San Gabriel Valley and the southeastern Los Angeles basin, according to the company.

Hundreds of Care emergency medical technicians and paramedics in L.A. and Orange counties unionized during the pandemic and are now trying to bargain their first contract. In January, the union entered a “vote of no confidence” against the company, arguing that “glaring wage discrepancies” had hurt employee retention.

“This decline in available personnel has directly affected the response efficacy of our units, undeniably losing savable lives and overworking existing personnel to the point of unsafe exhaustion,” the union board wrote.

Care has been fined more than $160,000 by Orange County this fiscal year, the bulk of those penalties tied to lagging response times, according to county data.

Orange County Emergency Medical Services medical director Dr. Carl Schultz said in late January that the company had “largely met” targets for response times, and that in previous months, “the slight increase in dispatch times has not posed a risk to public health and safety.”

L.A. County officials, who said they had waived their usual penalties for late responses amid the pandemic, also said Care had “largely met” their targets for response times. The county did not immediately provide information about how often Care was hitting those targets or how much in fines had been waived.

As of late January, as hospitals were grappling with the Omicron wave, Care estimated its Southern California workforce was between 5% and 7% below full staffing due to coronavirus-related absences and open positions. Lucia said that COVID, not worker turnover, had affected response times.

“Emergency providers nationwide are facing workforce shortages along with increases in 911 calls, and Southern California is no exception,” Lucia said in late January. “Meanwhile, hospital bed delays of up to 10 hours locally are taking ambulances out of service while our crews wait with patients for hospitals to make space for them.”

Petit, the national director of the union, estimated that only about a quarter of EMS employees are unionized nationally. IAEP now represents roughly 3,500 people in California, with the bulk of its membership growth having happened in the last decade, he said.

“As long as the wages are low, you’re just pushing people out,” Petit said. 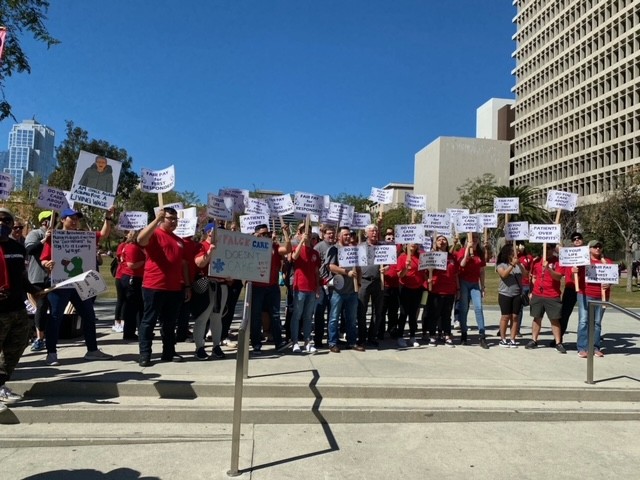