Published in the Providence Journal by the Newport Daily News
January 4, 2019


The Jamestown police officer who dove into freezing waters to save a drowning man has earned national recognition.

The National Law Enforcement Officers Memorial Fund named officer Nathaniel Schaffer the recipient of the Officer of the Month Award for December 2018.

Schaffer was working an extra patrol shift on Dec. 6 when a call came in around 1 a.m. regarding a man who had jumped into Narragansett Bay and was unable to get out.

Arriving first on the scene, Schaffer, who was soon joined by another officer, tried unsuccessfully to convince the man to swim to a nearby ladder. The man also was unable to grab a flotation device that Schaffer threw to him. Soon after, the man became unresponsive, requiring the officers to act quickly.

As the other officer went to retrieve another flotation device, Schaffer removed this shoes, jacket and vest before diving into the water. He was able to grab the man, but realized he would not be able to lift him up a six-foot ledge to waiting responders.

Schaffer then swam 100 feet to a nearby dock, where the responders were able to meet him. Both Schaffer and the man he saved were taken to a hospital for treatment for hypothermia. They were treated and released.

“I am very proud of Officer Schaffer for the action he took in placing his own life at risk in order to save another,” Jamestown Chief Edward Mello said in a statement. “He is a tremendous officer and fine example of what we should expect in our police officers.”

Schaffer, along with the other Officer of the Month Award recipients for 2018, will be honored at an awards ceremony in Washington, D.C., later this year. 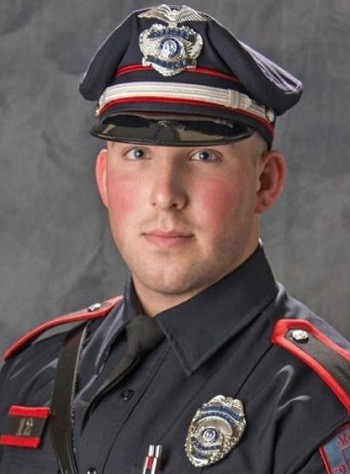