CRANSTON, R.I. (WPRI) — A momentous day for one local cancer patient was made even more special.

Callan Duquette woke up a few weeks ago, ready for his final leukemia treatment at Hasbro Children’s Hospital. What he didn’t know was that he was riding there in style thanks to dozens of first responders and his friend, who knows this battle all too well.

12 News met Cal and his friend Lorenzo Neri at a field in Cranston on a sunny fall day in November.

As they threw a football around, Lorenzo’s dad commented on how he still can’t believe they’re here, spending a carefree afternoon together after all they’ve been through.

It was just about a month into the pandemic when Lorenzo got ready for a day that had been years in the making: his last leukemia treatment. The coronavirus, however, was getting in the way of his parents’ big plans to mark the momentous occasion – or so they thought.

The first responders who work alongside Lorenzo’s mom Rebekah, a Cranston police officer, and David, a Cranston firefighter, showed up big time.

“Peter had told me, ‘I’ll text you, but you’ll hear the rumble first,'” Rebekah recalled.

Dozens of motorcycles, cruisers, and fire trucks rolled up to their home, ready to escort Lorenzo to Hasbro Children’s Hospital in his very own limo.

They even shut down the highway for the caravan. Lorenzo admitted that was his favorite part.

David Neri said it was while they were in the limo that it hit him: they had to make this happen for other kids, and who better than Lorenzo’s buddy Cal.

The two families met while both boys were receiving treatment at Hasbro’s Tomorrow Fund Clinic, and that’s how Enzo’s Escorts was born.

“My mom said that there was gonna be a surprise coming at 8 so we went outside and I just saw a bunch of police and didn’t even know what to do,” Cal said. “I was just in shock!”

Police and firefighters from multiple communities showed up on their day off to give Cal the VIP treatment, again shutting down the highway and even bringing in the Providence Mounted Command outside the hospital.

The Neris loved being on the other side of it, seeing their friends get to smile after such a hard time.

“It was a nice feeling to be able to give that back and to see the expressions on their faces, the whole family,” David said.

“To know him and to know the battle he went through … to see that smile meant the world,” Rebekah added.

Cal’s mom, Ally Duquette, called the Neris angels brought to them by God in the midst of the hardest time in their lives.

“If this is what it took, to have these extraordinary people in our lives, then it was worth it,” she said.

“He’s a great friend and it’s nice to have someone who actually knows what I’ve been going through,” Cal said, talking about his buddy Lorenzo.

The Neris have big plans to keep Enzo’s Escorts going. They’ve even launched a Facebook page where you can learn more about the effort. 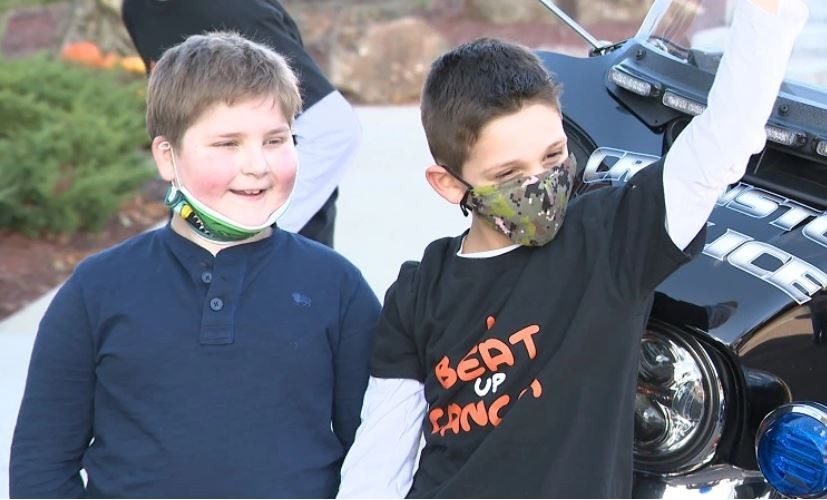