Adolfo Garcia, member of NAGE Local R1-200, is a finalist for a national award to recognize the integral work that school custodians do each day. Congratulation's on being recognized for your outstanding contribution Adolfo!
Published on ctpost.com
Written by Cayla Bamberger
Bridgeport custodian named finalist for national award

BRIDGEPORT — School custodian Adolfo Garcia greets students every day with a smile and knows most, if not all, of the more than 400 children in Madison Elementary by name, his colleagues say.

Tracy Williams, who teaches second grade at the same Bridgeport elementary school, said that’s one of many reasons why she nominated Garcia for a national award recognizing K-12 school custodians.

Known by students as “Pal Al,” Garcia was selected from about 2,200 nominations in the United States and Canada as a finalist for a $15,000 prize package shared between him and the school.

The winner will be announced May 14.

Nominating Garcia was a natural for Williams, who has multiple sclerosis. Garcia helps her with physical tasks made harder by the disease, she said.

“Without the help from Mr. Al, I would not be teaching,” said Williams. “He makes it possible for me to be able to do my job.”

The award is designed to recognize a school custodian both for his efforts as a custodian as well as his commitment to students.

“Just being part of their happy place means a lot,” said Garcia. “We have inside jokes, or special handshakes, or specific topics, like the Marvel movies,” he said. “A couple of these kids are Marvel movie fanatics, and I myself am a comic book — if you want to use (the word) — ‘nerd.’”

But the COVID-19 pandemic has changed some of that: “There’s not as much handshakes,” he added.

The global health crisis has raised the stakes of school custodians’ jobs. Custodial teams across the country had to report in person to schools while others worked from home, implement additional cleanliness and safety protocols and operate new cleaning and filtration equipment, with more eyes on them than ever before.

“This past year especially has demonstrated how critically important school custodians are, not only to the cleanliness of their facilities but to the morale of students and staff,” said Lisa Hrpcek from Tennant Company, which runs the custodian recognition campaign.

“There’s a lot more seriousness in the job,” said Garcia. “There’s always been a serious level to cleanliness and sanitizing, but especially now.”

Garcia said the workload is great but “a 40-hour work week has not been in my schedule since I first came to this school.”

Madison Elementary used to have three custodians, but two retired. Garcia had been doing the custodial work for entire school by himself until a new hire came on duty this past month.

“Sometimes people have a pre-determined decision or an opinion on what a custodian is. They just think you take out the garbage, you do some stuff here and there,” said Garcia. “But it’s very intricate at times — knowing the boiler system, changing light bulbs, changing air filters.”

The winner of the national award will be announced on May 14. 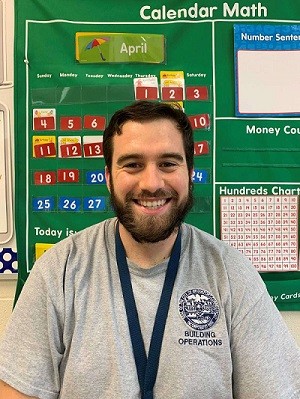 Adolfo Garcia, known at Madison Elementary as "Pal Al," is a finalist for a national school custodian award. Photo via ctpost.com